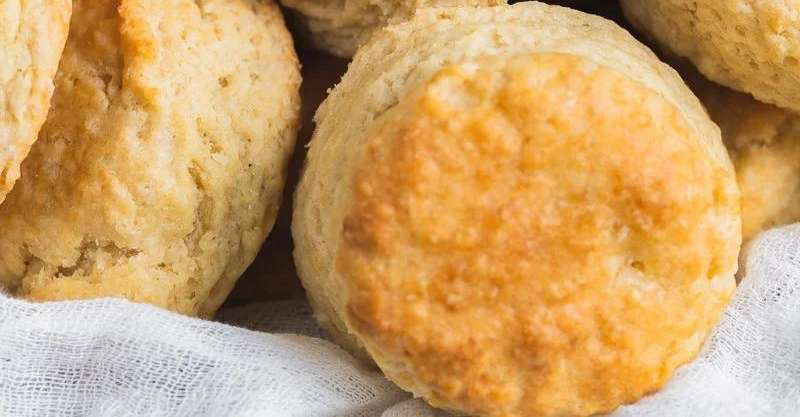 If you follow a vegan diet, you might think you will never again be able to eat a perfectly buttery Southern-style biscuit, but you’re wrong! Vegan butter and plant-based milk can be create a delicious vegan version of this breakfast favorite! Check out these delicious easy vegan biscuit recipes!

If you don’t want to spend time rolling and cutting your biscuits, drop biscuits are the way to go. This is one of the fastest easy vegan biscuit recipes you will find, coming together in about 20 minutes from start to finish.

This recipe from Karissa’s Vegan Kitchen uses non-dairy milk and apple cider vinegar to make a vegan “buttermilk.” Ingredients are pulsed in a food processor or mixed with a pastry cutter or fork. Then you just drop it onto a baking sheet and bake!

For classic, flaky biscuits, this recipe by Nora Cooks is a vegan version of traditional southern-style biscuits. These biscuits have glowing reviews, with many satisfied cooks calling them perfect!

This recipe uses soy milk and apple cider vinegar to create a vegan “buttermilk.” You can use either a food processor or a pastry blender to cut in your butter, then add your “buttermilk.” The dough is then rolled out and folded several times to create flaky layers. Cut with a biscuit cutter and bake biscuits for 15-20 minutes, and the golden-brown biscuits are ready to be topped with your favorite jam!

These biscuits are made from soy milk, apple cider vinegar, all-purpose flour, baking powder, sugar, salt, and cold vegan butter. Leftovers can be stored in the refrigerator or freezer.

Another fantastic recipe for vegan biscuits made with a biscuit cutter comes from The Curious Chickpea. These biscuits have 36 flaky layers made by folding the dough many times and pressing a biscuit cutter straight down to create the biscuits.

Cold vegan butter is cut into the dry ingredients using a pastry blender. Vegan “buttermilk” is added, and the dough is rolled on a floured surface, folding to create the layers of the biscuits. The biscuits are cut and baked for 13-15 minutes.

While most easy vegan biscuit recipes call for vegan butter, this recipe from Shane & Simple uses no butter or oil of any kind! These biscuits are made using applesauce, resulting in a slightly sweet biscuit perfect for breakfast.

This recipe uses almond milk and apple cider vinegar to create a vegan “buttermilk.” Applesauce is cut into the dry ingredients using a whisk or fork, and then the buttermilk is stirred in. The dough is then rolled out and cut with a biscuit cutter (or the top of a drinking glass).

These biscuits are made using almond milk, apple cider vinegar, organic unbleached flour, baking powder, baking soda, salt, and applesauce. Other types of plant milk and flour can be used as substitutions and work well, according to commenters.

This recipe for vegan biscuits by Ceara’s Kitchen is made using full-fat coconut milk in place of both milk and butter, resulting in a delicious biscuit with only five ingredients. The recipe also includes a variation to make savory garlic-herb biscuits.

The recipe calls for full-fat coconut milk that is as cold as possible to create fluffy biscuits. Mix coconut milk with vinegar before combining with the dry ingredients. Once dough forms, roll it out on a floured surface and use a cookie cutter or rim of a glass to cut biscuits. Bake for 12 to 15 minutes.

For this recipe, you will make vegan “buttermilk” using plant-based milk and apple cider vinegar. This recipe also calls for vegan yogurt, which adds moisture to the biscuits. The dough is folded to produce flaky layers. Use a biscuit cutter to form biscuits, and bake for 15 minutes.

This vegan biscuit recipe from Holy Cow Vegan has glowing reviews from those who have tried the recipe. Vaishali, the author of the blog, has been making these biscuits for over a decade, so this is a tried and true recipe.

For the fluffiest biscuits, use unbleached all-purpose flour, although you can use half whole wheat flour if you wish. Use a fork or pastry blender to cut in your vegan butter, then add vegan “buttermilk” made from non-dairy milk and apple cider vinegar. Roll the dough, cut with a biscuit cutter, and bake for 12-14 minutes.

8. The Best Vegan Biscuit Recipe by I’m Hungry for That

These soft and flaky biscuits by I’m Hungry for That are perfect for brunch or as a side for your favorite vegan dinner entrees. Instead of using vinegar to create a vegan “buttermilk,” this recipe instead uses lemon or orange juice, giving the biscuits a bit of fresh citrus flavor.

The dough is kneaded and then folded to create the layers of the biscuits. Cut the biscuits using a biscuit cutter and bake! The whole recipe comes together in about 30 minutes.

Soy or almond milk, lemon or orange juice, all-purpose flour, sugar, baking powder, baking soda, salt, and vegan butter are all you need to create these biscuits. You can also substitute gluten-free flour.

In 30 minutes and using just one bowl, you can whip up these tasty biscuits by Minimalist Baker. Almond milk and lemon juice create the vegan “buttermilk” for this recipe.

Dozens of five-star reviews suggest that these may, in fact, be the best damn vegan biscuits, as the recipe’s name suggests. Use a pastry blender or your fingers to blend the butter into the dry ingredients, then slowly add the vegan buttermilk. This recipe calls for very little kneading and no folding before cutting your biscuits and baking.

This recipe is a little bit more time-consuming than some of the other vegan biscuit recipes, but the results are phenomenal. Placing ingredients and the formed biscuits in the freezer to chill takes a little bit of extra time, but it is what makes these biscuits extra fluffy.

Chilled butter is cut into the dry ingredients using a food processor or a pastry blender. After the vegan buttermilk mixture is added, the dough is rolled and folded to create flaky layers. Once biscuits are cut and placed on a baking tray, they are put in the freezer once more before baking.

11. Quick and Easy Vegan Biscuits by The Spruce Eats

This simple recipe from The Spruce Eats uses only five ingredients to create a vegan version of the classic southern-style biscuit. While other most other easy vegan biscuit recipes require additional steps of making “vegan buttermilk” and folding dough many times, this recipe requires very little prep and few steps.

Simply mix the dry ingredients, cut in the margarine, then mix in the soy milk. The dough is rolled out, cut with a biscuit cutter, and baked for 12 to 15 minutes. The whole recipe comes together in only 30 minutes.

Flour, baking powder, salt, margarine, and soy milk are the only ingredients needed for this easy recipe.

Are you craving buttermilk biscuits but don’t have a brunch planned and just want one for yourself? You’re in luck! Justine Snacks created the perfect recipe for a single-serving vegan biscuit!

In this recipe, frozen vegan butter is grated into the flour mixture. Ice cold almond milk or oat milk is mixed in to form the dough. The dough is folded to create the biscuit’s layer. No biscuit cutter is needed for this recipe because the entire recipe makes one biscuit! Just form it into a circular shape with your hands, brush it with melted vegan butter, and bake!

You will cut the cold vegan butter into the dry ingredients using a pastry blender. Once the buttermilk mixture is incorporated, use your hands instead of a rolling pin to flatten the dough. Use a biscuit cutter to form biscuits, and bake for 18 to 20 minutes.

These vegan buttermilk biscuits are baked in a cast-iron skillet, giving the recipe an even more authentic and rustic feel. Plant-based milk and lemon juice combine to create a vegan “buttermilk.”

This recipe calls for the butter to be added to the dry ingredients using a mixer with a paddle attachment. Once the vegan buttermilk mixture has been added, the dough is rolled on a floured surface and cut with a biscuit cutter. Place the biscuits in the cast iron skillet (or baking sheet) and bake!

Cozy Peach Kitchen has adapted the classic Southern buttermilk biscuit recipe to make it vegan, and the results are a soft, fluffy, flaky biscuit perfect for your Sunday brunch.

This recipe recommends using White Lily all-purpose flour for the most authentic Southern-style biscuits. Vegan butter is cut into the dry ingredients using a pastry blender, fork, or your fingers. A vegan “buttermilk” mixture of soy milk and apple cider vinegar is incorporated to form a dough. The dough is then rolled, folded to make layers, cut with a biscuit cutter, and baked!

This recipe from the New York Times requires no kneading, rolling, or folding. Also included is a recipe for delicious maple butter to serve with your biscuits!

Cut margarine into the dry ingredients using a pastry cutter and stir in the non-dairy milk. Turn the dough onto a floured surface, pat it into an oblong shape, and cut with a biscuit cutter. Biscuits are brushed with melted vegan butter and baked for 12 to 15 minutes. Then enjoy with maple butter or your favorite jam!

Flour, baking powder, salt, margarine, and plant-based milk combine to make these perfectly soft and flaky biscuits. All you need for the maple butter is vegan margarine and maple butter.

17. Fluffy Homemade Vegan Biscuits by Jessica in the Kitchen

These vegan biscuits by Jessica in the Kitchen are sky-high with delicious, flaky layers! Don’t want to deal with re-rolling your scraps while cutting out your biscuits? Just cut the biscuits into squares instead of circles! Jessica, the author of the blog, says that although circles are the default, squares work just as well.

Cold vegan butter is cut into the dry ingredients using a pastry cutter, fork, or hands. Vegan “buttermilk” made from soy milk and apple cider vinegar is added to form a dough. The dough is turned onto a floured surface and folded five times to create flaky layers. Biscuits are cut with a biscuit cutter (or just into squares) and baked!

No matter which recipe you choose, you will not be disappointed! These easy vegan biscuit recipes are so delicious that it’s hard to believe they’re all vegan!