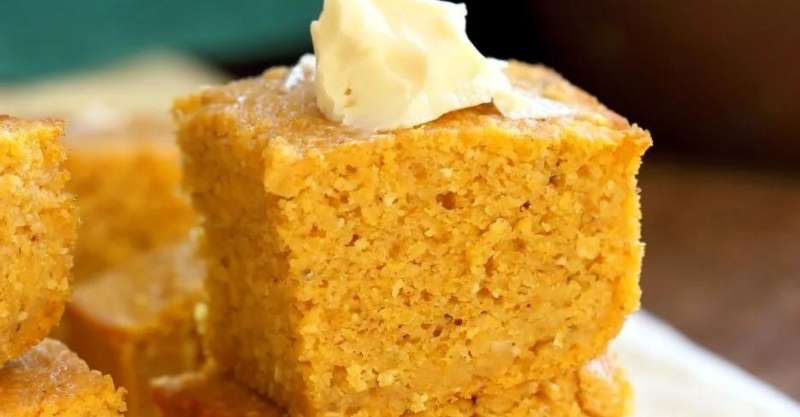 Cornbread is one side dish that satisfies sweet and savory cravings. In the Southern United States, it is a staple you can find at many dinner tables.

Vegan cornbread does not have to be boring. You can add fresh or frozen ingredients to create a variation in texture and flavor.

1. The Easiest (and Most Delicious) Vegan Cornbread by It Doesn’t Taste Like Chicken

Cornbread is an easy-peasy side. It is beloved across the nation for its taste and texture. It is also efficient because you can use one bowl to mix all the ingredients and one pan to bake it. That makes the kitchen clean-up a fast and painless process.

This vegan cornbread recipe is on the sweeter side. It is sweetened with white sugar, plus it only takes one bowl to make. This slightly sweet side dish pairs nicely with a savory dish like vegan chili. The moist and fluffy cornbread adds the needed special touch to any vegan comfort food.

This vegan recipe offers yummy fat-free and oil-free cornbread. However, just because this cornbread is oil-free does not necessarily mean that it will be dry. Applesauce is used in this recipe to add moisture. The option to turn these into vegan cornbread muffins is also a possibility—you’ll just need to change the bake time.

Cornbread is not limited to a certain mealtime. You can have cornbread for lunch, dinner, or dessert. Try adding fruit like blueberries for a different flavor. Maybe have blueberry vegan oil-free cornbread muffins for breakfast.

If you are looking for healthier options for your vegan cornbread recipes, this recipe is for you. It’s fat-free and oil-free, which reduces fat content significantly. So you have the chance to enjoy delicious vegan oil-free cornbread without worrying about eating excessive butter, oils, and fats.

Though this recipe is sweet instead of savory, it is well balanced with density and texture. Cornbread is popular, and people have different preferences for textures. Cornbread is often made using cornmeal or maize that has a grainy, gritty texture. So if you prefer a dense, cake-like vegan cornbread, then this recipe may not be for you.

Soft and fluffy vegan cornbread can be served with a variety of foods such as stews and soups. Nora Cook’s recipe for vegan cornbread has a sweetness that mildly appeals to a sweet tooth. It is not as sweet as a dessert. But it can be a sweet treat when vegan cornbread is dressed with vegan butter, maple syrup, or jam.

The texture of food plays a large role in its enjoyment to some people. If you have tried cornbread in the past, but its crumbly and grainy texture did not appeal to you, then try this recipe.

Yes, the Best Vegan Cornbread holds to its non-vegan classic cornbread texture, but not so much that it overwhelmingly places your taste buds in shock.

Classic or traditional cornbread recipes sometimes include the ingredient buttermilk. Buttermilk adds rich flavor and aids in the softness of cornbread.

When making vegan cornbread, the same softness and tenderness can be created using a combination of dairy-free milk or soy milk and apple cider vinegar. The acidic nature of the vinegar causes the dairy-free milk to curdle, similar to buttermilk.

Minimalist Baker has used this technique to create the Perfect Vegan Cornbread, which is naturally sweetened and it’s gluten-free. This is yet another example of the delicious encounters that vegans have on their daily journey—no doubts or neglect of flavors.

What’s your idea for perfect cornbread? Soft, moist, fluffy, and tender describe the ideal situation for cornbread. What about flavor? Is your preference sweet or savory? Are you looking to try something new? Will you be adventurous and make subtle changes?

Yes, cornbread is a side dish, but it doesn’t always have to be treated like one.

Sweet cornbread is seemingly preferred over savory. However, with the Conscious Plant Kitchen recipe for vegan cornbread, you can make adjustments to lessen the sweetness. This one-bowl recipe makes a moist and fluffy batch of vegan cornbread.

One thing to note about adjusting the recipe. It is best to stick to the outlined instructions to get the intended texture of vegan cornbread.

Just a word of caution. Each ingredient plays an important role. Some ingredients may have a dual or multi-purpose. For example, applesauce in a recipe may add moisture, act as a binding agent—holding all the ingredients together—and lightly sweeten the dish. Ingredients matter for taste, texture, flavor, and structure.

6. The Best Vegan Southern-Style Cornbread by My Quiet Kitchen

A savory homestyle southern-style vegan cornbread that offers a buttery rich taste best describes the recipe for vegan cornbread by My Quiet Kitchen. This recipe appeals to those who grew accustomed to the highly salty and buttery taste of thick and fluffy cornbread, like those who may have lived in Texas.

Savory vegan cornbread can be served with just about anything. Serve it as a side with soups, salads, stew, chili, or even southern comfort food like greens. Sweet or savory, cornbread makes flattering compliments to an array of meals. No wonder why traditional southerners can’t seem to get enough of it.

7. Vegan Cornbread Recipe (The BEST!) by Jessica In the Kitchen

Achieving the best texture and taste for your vegan cornbread is not limited to the ingredients. It is also how you mix the ingredients. Overmixing your cornbread batter leads to extra tough and crumbly cornbread. Jessica in the Kitchen instructs bakers to mix all dry ingredients first in her recipe. Then add the wet ingredients.

Making cornbread is a simple and quick process. However, skipping any step or altering an ingredient will drastically affect the outcome of your cornbread. From beginning to end, the process hangs in a delicate balance. You risk losing moisture and altering the texture of the cornbread from overbaking.

If you think you have slightly overcooked your vegan cornbread, you can add vegan butter on top. This adds the last-minute moisture that your cornbread lacks. Extremely dry cornbread is excessively crumbly, and it often has a hard exterior.

Hot water cornbread is a form of cornbread that has been lightly pan-fried in oil. If you were looking for a way to make cornbread without using your oven, then here’s the option for you.

9. Vegan Jalapeño Cornbread by Plant Based on a Budget

If you like to have evident spices in a dish, then this vegan jalapeño cornbread recipe is for you. This fluffy, moist, spicy yet sweet vegan cornbread is pleasing to your taste buds with tons of flavor and a palatable texture. The combination of jalapeños and sweet corn creates bold flavors to give you the best of both worlds—sweet and savory.

Visually this cornbread displays a contrast in colors and textures. Depending on if you finely diced the jalapeño peppers, the spicy peppers may be seen from the outside of your cornbread.

Try this vegan jalapeño cornbread to stimulate all of your senses with the taste, smell, and sight of this delicious cornbread.

Are you looking for a vegan cornbread recipe that is also gluten-free? Here it is. Rhian’s Recipes has a refined sugar-free, egg-free, gluten-free, and dairy-free cornbread muffin recipe.

Rhian’s recipe is refined sugar-free, but it does not lack in the sweetness department. Instead, this vegan cornbread is sweetened using a liquid sweetener like agave or maple syrup.

There are recommended substitutions to make reasonable adjustments to accommodate your preferences in taste without compromising the texture and structure of the bread. The overall taste is important, but you don’t want to jeopardize the integrity of your bread.

Vegan cornbread is not subject to any less deliciousness because it does not have eggs, butter, or milk. Vegan Blueberry with her Amazing Vegan Cornbread recipe makes sure to note that for those willing to try her recipe.

This recipe uses flax seed that acts as an egg replacer. It helps bind all the ingredients together and gives the cornbread a great structure. No butter is used, but oil is used instead. And for the milk, dairy-free milk is the choice. Almond milk or soy milk, whatever your preference, will work well in the recipe.

Ambitious Kitchen shares a delightfully sweet yet healthy recipe for cornbread muffins. The original recipe calls for eggs. However, substitutions can be made to accommodate vegans and those who have gluten allergies. For example, instead of using eggs, flax seeds can be used. Also, to avoid gluten allergies, it has been recommended to make your own gluten-free oat flour.

Unlike the other listed vegan cornbread recipes, this one uses a vegetable puré instead of applesauce. The mashed sweet potato gives a different flavor and color to the cornbread. Even using an ingredient uncommon to traditional cornbread, the texture is not altered. You have sweet fluffy, moist, and soft cornbread muffins made with sweet potatoes.

These flavorful muffins are delicious enough to eat alone. However, if you must serve it with another dish, then try serving it with hearty and savory dishes like a black bean and tortilla soup. You could also serve it with a fresh and flavorful garden salad.

Vegetables like pumpkin and squash bring the fall season to mind. Pairing a warm bowl of broccoli and kale soup with pumpkin cornbread adds a variety of flavors and comfort. Vegan Richa’s one-bowl recipe is simple. The total preparation time from start to finish is 40 minutes.

Those few minutes are worth it. You realize it once you take a bite into the yummy, healthy vegan pumpkin cornbread.

This is an excellent recipe for those looking to add some variation to the traditional cornbread taste.

This savory vegan skillet cornbread is a little different from other vegan cornbreads. It has a tad bit more spice. Resplendent Kitchen has done a great job of letting the Southwest shine through in this recipe. A few of the listed ingredients are fire-roasted corn and green chiles.

Baked in a cast-iron skillet, which is a heavy-duty baking tool and a southern American household staple, the spice or heat can be kicked up a notch. Variations of this vegan skillet cornbread offer poblano peppers and Hatch chiles.

If you’re a fan of savory cornbreads with a kick, then this recipe is definitely worth a try.

Having a vegan diet does not come without its challenges. Whether that is trying to create or find vegan-friendly alternatives to a variety of popular dishes, it does not mean that you compromise your health or the taste and flavor of your favorite dishes.

This recipe from Nest and Glow is a simple reminder that essential and valuable nutrition can be gathered from an assortment of sources.

There is one noticeable thing that is unique to this recipe. Cornbread is generally made from cornmeal. There is no cornmeal in this recipe. It is a “cornbread” recipe, but the texture will not be similar to that of the traditional southern cornbread.  The bread made from this recipe has a fluffy, cake-like, moist, and soft texture.

If you are looking for an entirely different cornbread experience, then this recipe is worth a try.

There are many different variations of cornbread. You can choose sweet or savory, add spices and herbs, or add fresh corn or berries. So much can be done with this quick and simple staple side dish. So which variation will you try?