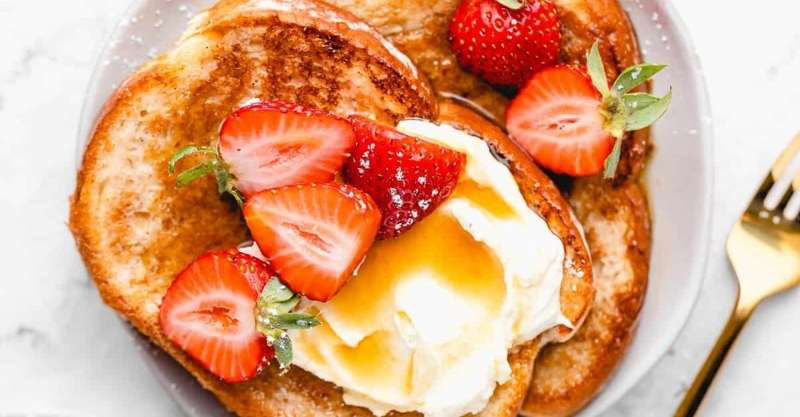 One of the most challenging breakfast items to make vegan after going plant-based is French toast. Since the traditional recipe requires eggs, finding suitable substitutions can be a hassle.

When all you’re craving is a delicious plate of French toast, these vegan recipes should be more than enough to satisfy you. So whether you’re looking for a classic recipe, something sweet, or even savory, you need to try these recipes.

If you’re craving a classic French toast recipe, vegan, of course, this one by A Virtual Vegan is one you need to try. Instead of using eggs, this recipe requires tofu which helps give the bread the custardy texture.

Other ingredients you’ll need include your bread of choice, any plant-based milk, vanilla extract, cinnamon, salt, and vegan butter. Bread that’s slightly stale and sturdy works best for most French toast recipes, including this one.

Combining the tofu, plant-based milk, vanilla, cinnamon, and salt in a blender will make the “egg’ mixture. This easy French toast recipe only takes a total of 15 minutes. You can top it with whatever fruit you like or go with classic syrup. Either way, you’ll have a delicious and filling meal within minutes.

One of the best parts about making French toast is that you can add virtually any fruit to the top and have a beautiful and delicious dish. This vegan banana French toast by The Simple Veganista is the perfect amount of sweetness.

All you need for this recipe is six ingredients and 20 minutes of your time. You’ll need oat milk, sturdy white bread, cinnamon, vanilla, vegan butter, and bananas. The riper the bananas, the sweeter your French toast will be.

This vegan French toast recipe has a few more ingredients than other options, but it’s still just as easy and tasty. For this recipe by The Banana Diaries, you’ll want to use vegan Challah bread or Brioche. There are five minutes of prep work and ten minutes of preparation.

You’ll follow the specific instructions on how to prepare the batter to ensure you get a tasty French toast that’s not soggy like some recipes. Once the dish is cooked, you can top it with whatever your heart desires.

Most of the easiest French toast recipes online aren’t more than 20 minutes. If you have even less time in the morning but want to enjoy a delicious meal, this vegan French toast by Nora Cooks only takes ten minutes.

The batter for this recipe consists of maple syrup, unsweetened soy milk, cornstarch, ground flaxseeds, cinnamon, baking powder, and vanilla extract. The cornstarch is what will help it feel thicker like eggs.

After making your batter, you’ll soak your bread of choice for about two to three minutes. You can use any cooking oil or vegan butter to fry the French toast, and then you’ll serve!

You’ll soak it in your batter of plant-based milk, cinnamon, vanilla, and sugar before frying it up with vegan butter or cooking oil. You can eat it as is or top it with vegan whipped cream, syrup, and more berries.

If you’ve never had a savory French toast, then you need to try this vegan option by Holy Cow Vegan. While most people opt for a sweet French toast, something about this savory herb recipe will put a smile on your face.

The best part of this recipe is that you’ll combine all the ingredients into a bowl and mix until there are no lumps. After you coat your bread, you can fry it and serve it with fresh herbs.

The Wallflower Kitchen’s vegan French toast recipe is a take on the classic French toast made with eggs. There are no-frills, but it makes it easy and a staple in your recipe book. Two unique ingredients make this recipe stand out.

You’ll need your plant-based milk of choice, vegan butter, vanilla extract, salt, and cinnamon. The two additional ingredients that set this recipe apart are the pumpkin spice and chickpea flour.

When mixed with plant-based milk, the chickpea flour perfectly mimics the texture of eggs, and those who aren’t vegan won’t even know the difference.

This 15-minute vegan French toast has a delicious berry compote on top. Since French toast recipes require slightly stale bread, if you don’t have stale bread, Rainbow Plant Life offers a solution to get your bread French-toast ready by baking for about eight minutes.

You’ll need oat milk, chickpea flour, cinnamon, nutritional yeast, nutmeg, vegan butter, and salt. You’ll combine the above ingredients for the batter and then fry your bread in a pan.

For the berry compote, you’ll add your berries of choice, sugar, and orange juice to a pan and let it reduce for ten to 15 minutes while you prepare the French toast.

Minimalist Baker is known for creating some delicious vegan recipes, and this basic vegan French toast is one of the best. The ingredients are simple and easy to get at almost any local grocery store, and you’ll have French toast on your plate in roughly 26 minutes.

This French toast recipe makes five servings, but you can adjust it as needed. You’ll need rustic bread, plenty of chia seeds, maple syrup or agave nectar, almond milk, cinnamon, and vanilla extract. The chia seeds are the critical component in replacing the eggs in French toast.

Since you’re using chia seeds, you’ll need to let the batter activate in the fridge for ten to 20 minutes before soaking the bread.

Another delicious stuffed vegan French toast recipe is one with vegan strawberry cream cheese by Best of Vegan. It’s like eating dessert for breakfast or any time of the day. This recipe makes four slices of French toast, perfect for two people.

You’ll make slits in the bread, add the filling, soak it in the batter, and fry. You can top it with more strawberries and powdered sugar or eat it as is.

For those who love a little spice in their food, this savory and spicy vegan French toast is the best dish you need to try.

You can make this for breakfast, lunch, dinner, or even a hearty snack when you’re craving something spicy. The recipe is a blend of simple spices and is high-protein.

Besides bread, what you’ll need for this recipe include chickpea and almond flour, nutritional yeast, basil, cumin powder, cayenne pepper, parsley, garlic, oregano, salt, water, and your choice of dairy-free milk. You eat it as is, or add onion, bell peppers, and jalapenos.

Another super simple vegan French toast recipe comes from Food With Feeling. There are several egg substitutes for French toast, like chia seeds and liquid plant-based eggs, but this recipe calls for flax seed.

Besides vegan bread and ground flaxseed, other ingredients you’ll need include cinnamon, nutmeg, almond milk, salt, and vanilla extract. These warm yet straightforward ingredients will leave you with a classic yet vegan French toast.

This recipe doesn’t require any toppings, but they suggest berries and maple syrup. You can add whatever you want, though.

Almost every French Toast recipe requires cinnamon for that classic flavor. This specific vegan French toast recipe elevates that delicious flavor and puts it at the forefront of the dish.

This easy vegan French toast recipe can be on your plate in 30 minutes and only has seven ingredients. You’ll need thick slices of bread, flaxseed, maple syrup, vegan milk, vegan butter or oil, vanilla extract, and plenty of ground cinnamon.

You’ll cook the French toast how you would like any other by soaking it in the liquid and then frying it. Once you plate it, you can top it with whatever you want, but strawberries are the choice for this recipe.

French toast is already sweet, but if you want to make something even sweeter, this vegan chocolate French toast by Cook Click n’Devour is excellent. It makes the perfect sweet breakfast or dessert.

It has all your common vegan ingredients like vegan milk, vegan butter, and bread. You’ll also need cornflour and the chocolate of your choice. If you want an excellent topping pairing, you’ll need bananas too.

Caramelizing the bananas before topping them is easy and makes your chocolate vegan French toast elegant and tasty.

Coconut milk is excellent plant-based milk to use when you’re vegan and need something naturally sweet. You’ll utilize coconut milk and other ingredients for this French toast recipe to create delightful French toast.

This recipe only takes 26 minutes, 12 minutes of preparation, and 14 minutes of cooking. Besides the bread and coconut milk, you’ll need chickpea flour, water, vanilla, cinnamon, and coconut oil.

When you’re craving French toast but also avocado, this savory vegan French toast is the perfect compromise. The recipe only takes 20 minutes to make and makes six servings.

For the batter, you’ll need almond milk, nutritional yeast, cornstarch, chickpea flour, garlic powder, onion powder, and hot sauce if you like it spicy. Other ingredients include thick slices of bread, high-heat oil for frying, and your toppings of choice.

After frying, this recipe tastes best with some sliced avocado, tomatoes, onions, and even balsamic glaze drizzled on top.

This vegan French toast recipe reminds us of the holidays, but you can eat it whenever you want. It’s easy to make and tastes as you slaved over the stove for hours when it only took 30 minutes.

You can eat the French toast with just the batter, but you won’t want to miss trying their topping, which is included in the recipe. It combines cranberries, orange zest, maple syrup, and sugar to create something out of a holiday cookbook.

This recipe uses silken tofu, plant-based milk, cinnamon, nutmeg, ground flaxseed, vanilla, and vegan bread. You can use whatever vegan cream cheese you prefer, powdered sugar, and vanilla for the filling.

After filling and frying your French toast, you should try it with peaches and blueberries like Make It Dairy Free suggests.

This eggless French toast by Planty of Eats is sweet and refreshing. You’ll have it on your plate in less than 30 minutes and will be going back for seconds in no time.

The recipe is easy to follow, and you’ll top it with sliced peaches and maple syrup if you want an extra level of sweetness.

Going vegan doesn’t mean you need to give up your beloved French toast. More and more chefs and content creators are coming out with vegan versions of the best French toast recipes.

You can’t go wrong with any of these recipes for your next home-cooked breakfast.