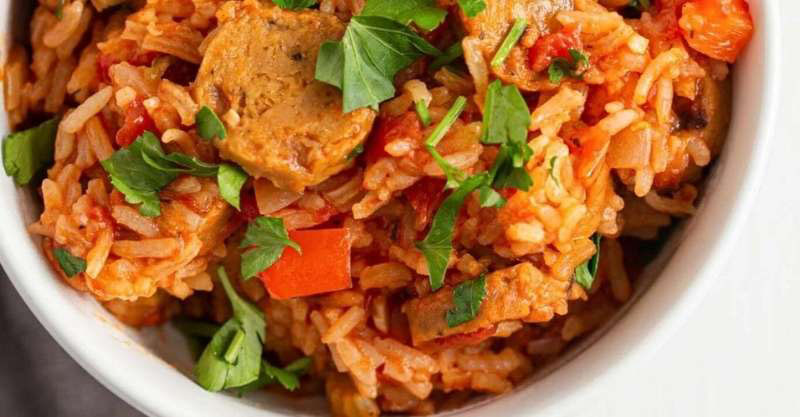 Do you love spicy Cajun and Creole food? If so, you probably love jambalaya.

Check out these simple vegan jambalaya recipes. They’ve got all of the flavors without any animal products. Just like your classic bowl of mac and cheese, this meal will become your new favorite comfort food.

The delicious vegan Jambalaya recipe uses beans and chickpeas as the main form of protein. The dish sticks to its Spanish, French, and Louisianan roots by packing this hearty meal with classic flavor combinations.

Simple Vegan Blog’s recipe can be made oil-free by sauteeing the veggies in vegetable stock or water. Also, you can use fresh or canned tomatoes, and whatever rice you have available for this recipe.

It serves around seven people, so if you’re making it for one person, you’ll have lots of leftovers. If you want to cook up a feast, this dish goes well with a side of vegan cornbread and a fresh green salad.

If you’re looking for a super simple Jambalaya recipe, then this one from Conscious Plant Kitchen is the one for you. You can make the recipe in one pot and cook everything in 30 minutes. The Louisiana-style dinner will make your family members call you their hero.

The recipe asks for red kidney beans and vegan sausages along with:

To bring more spice and flavor to the dish, make sure to add garlic, paprika, oregano, and Cajun seasoning. First, cook the rice and then add the proteins and vegetables. It couldn’t be easier!

Another easy recipe that you can make in one pot comes from Nora Cooks. Once again, you can use some tasty vegan sausages, soft rice, and plenty of veggies.

Not only is this recipe simple enough that any cook can master, but it’s also freezer friendly. So you can have some convenient frozen meals ready for days when you don’t feel like cooking.

You’ll top off the low-calorie meal with green onions and parsley so that it looks as good as it tastes.

4. Vegan Jambalaya by The Simple Veganista

This Simple Veganista recipe is a one-pot meal that  requires the following ingredients:

If you want to switch things up, you can use quinoa or brown rice instead of white rice.

With two main protein sources, this jambalaya will keep you fuller for longer. It’s also a budget-friendly option as it uses simple ingredients and makes 6-8 servings.

Serve it with vegan cornbread for the ultimate comfort meal on a cold night.

5. Vegan Jambalaya by The Stingy Vegan

The vegan recipe here uses mushrooms and beans to replace the shrimp and sausage commonly found in a meat-based jambalaya. The plant-based dish still sticks to the Southern comfort food you would find in Louisiana.

To make it spicier, you can add two tablespoons of Tabasco sauce. You’ll saute the bell peppers, onions, celery, and mushrooms before adding:

This dish is spruced up with fresh herbs and Tabasco sauce. If you’re making this for fussy kids, you can always opt for less or no Tabasco sauce. Either way, The Stingy Vegan’s recipe will be a hit!

Cajun recipes from Louisiana aren’t always easy to make. However, this recipe from Emilie Eats takes no time at all to complete, and you won’t need any unique supplies.

The recipe also tastes delicious, has a layered flavor profile, and is loaded with vegan protein sources.

Cajun jambalayas start with browning the onions, celery, and bell pepper and then adding the vegetable stock and white rice. The recipe here uses red kidney beans and vegan sausage as its source of protein. You should use extra virgin olive oil to cook everything.

It’s as authentic as a vegan jambalaya recipe can get!

7. Vegan Jambalaya by Loving It Vegan

The recipe from Loving It Vegan has strong and spicy flavors. The bold flavors make the Jambalaya so delicious that your family members and kids will be asking for seconds and thirds.

The dish here uses vegan sausage and tasty ingredients like:

Furthermore, the recipe requires long-grain white rice, vegetable stock, and some parsley and green onions as garnish. So not only is this meal delicious, it’s healthy too!

For a tasty and flavorful dish, choose the vegan jambalaya recipe from Holy Cow Vegan. You can cook the colorful dish using only one pot. The main ingredients include kidney beans, white rice, and mushrooms.

If you’ve ever visited New Orleans, you will see plenty of restaurants serving Jambalaya dishes, but you won’t see many vegan versions.

Don’t forget to add paprika and other seasonings to give that great flavor to your dish.

9. Vegan Jambalaya in Under 30 Minutes by Kathy’s Vegan Kitchen

Want a simple and quick vegan Jambalaya recipe? The one from Kathy’s Vegan Kitchen takes less than half an hour to make. You only need one pot to complete the recipe, and it doesn’t require any special instruments.

The recipe here has a hot and spicy creole flavor. The tasty meal requires brown rice, beans, veggies, and spices. You will also need to add some red bell peppers, tomatoes, mushrooms, celery, and garlic. One interesting ingredient to add here is the Jalapeno pepper to give it a real kick.

If you’re not used to spicy food, you can choose to skip the pepper. There’s plenty of flavor without it.

This slow cooker recipe uses beans and vegan sausages instead of shrimp and animal protein. You can make the dish on the stove as well, but a slow cooker gives it even more flavor and a softer texture.

Olive oil is the best oil to use for the recipe. You can use either green or red bell peppers along with onions, celery, garlic, salt, and spices. For a perfect garnish, use hot sauce, and scallions.

You can also make this jambalaya gluten-free by opting for vegan sausages that don’t contain gluten.

The Southern dish will make your taste buds dance. You will still gain plenty of protein and vitamins while enjoying a vegan, nut-free, gluten-free, and oil-free dish.

The recipe is also low in fat while providing plenty of delicious flavors. Tasty ingredients for the vegan jambalaya recipe include:

The seasonings you’ll need to add include cumin, basil, paprika, thyme, and oregano.

Do you love the Cajun and Creole cooking of New Orleans? If so, try your hand at the vegan jambalaya recipe from Namely Marly. This jambalaya recipe comes with Creole seasonings and hearty ingredients like beans, onions, garlic, bell peppers, and brown rice.

You should also use vegan sausage, canned tomatoes, and vegetable broth. To give it more flavor, you’ll add soy sauce. The soy sauce gives it an umami kick.

You will need to cook the vegan sausage in a pan separately before adding it to the pot of jambalaya. Your friends and family will love the tasty dish on Saturday night!

If you’re looking for a delicious yet easy-to-make recipe, then check out the vegan jambalaya recipe from Garden Grub. The dish has plenty of flavors while being healthier than the meat-based jambalaya.

The recipe makes for a great meal on a cold night that you can munch on while watching TV under a blanket.

Some of the more unique ingredients in the recipe here are:

You will love the Creole dish with its flavorful and spicy kick.

The plant-based recipe has plenty of vitamin C, fiber, and iron. The best part? You can make this simple dish in only one pot.

Instead of vegetable broth, the recipe asks for vegetable bouillon powder. You’ll also be eating the rainbow, as this recipe calls for yellow bell peppers, chili flakes,  onions, celery sticks, garlic cloves, and parsley for garnish.

The flavors here come together so well that your family will love the dish and you for making it!

The recipe from EatingWell provides a nice spiciness that you won’t get from other Jambalayas. The flavors are classic and delicious with the addition of Jalapeno peppers, celery, onions, and red bell peppers.

You only need to use one skillet to cook up the delicious meal. Instead of animal-based protein, the dish requires vegan sausage. You can use storebought sausages, or you can put in the extra effort and make your own.

Sprinkle the top of the dish with scallions once it’s done cooking.

Do you want an easy one-pot recipe when making your vegan Jambalaya on a weeknight? Then, check out the recipe from One Green Planet.

The flavors are delicious without being overpowering. You need to add Cajun seasoning, cayenne pepper, paprika, and thyme to give it a spicy kick.

Also, vegan sausages and short-grain white rice make the dish well-rounded and full of protein. To make it sweet, add some coconut sugar. You can’t go wrong with this foolproof recipe. Enjoy!

17. Vegetarian Jambalaya by the Food Network

The Food Network recipe is a bit different and uses other more unique ingredients like fire-roasted tomatoes, okra, and frozen black-eyed peas.

This veggie-heavy meal has carrots, celery, and bell pepper, making it nutritious and well-rounded. If you like salty food, you may want to consider adding some soy sauce to up the sodium and give it a more robust umami flavor.

It takes 40 minutes to prepare, and it’s well worth the effort.

18. Veg Jambalaya by Taste of Home

The tasty Jambalaya recipe from the Taste of Home implements various changes to a typical vegan Jambalaya dish. For instance, the recipe asks for tomato sauce and two cups of water instead of vegetable broth. Also, you will want to use canola oil instead of extra-virgin olive oil.

You will want to use a Dutch oven to cook the meal. For the flavors and spices, the recipe requires crushed red pepper flakes, Italian seasoning, and salt.

For the protein, the dish here requires one can of red beans and one can of butter beans.

You will also need to add green and red bell peppers. Some Tabasco sauce adds a nice kick.

For the protein source, you can use chickpeas or kidney beans. Don’t forget the brown rice and spices like paprika, oregano, thyme, and cayenne pepper. The smoky flavors in this jambalaya are bold but not overpowering, so it’s sure to be a real crowdpleaser.

20. Spicy Vegan Jambalaya by Life as a Strawberry

When making the spicy vegan Jambalaya recipe from Life as a Strawberry, make sure to use vegan Worcestershire sauce. For a better texture and flavor, you can always add some mushrooms, tofu, or seitan.

The spiciness comes from Jalapeno peppers and paprika, while the tomatoes give it a creamy texture.

The best part? You will only need to use one pot, which makes it easy to clean up when you’re done cooking. As usual, don’t forget to saute the bell peppers and onions. You’ll love the heat of this simple recipe!

Some of the delicious flavors in the recipe from Cozy Peach Kitchen come from the wonderful ingredients like:

You might also want to add some okra or squash. Garnish the dish with parsley and squeeze some lemon juice on top for a layered flavor.

To give it more heat, add some hot sauce. If you’re looking to make a Creole or Cajun recipe, this vegan Jambalaya makes perfect comfort food on those cold nights in the fall or winter.

As you can see, Jambalaya can be as simple to prepare as it is delicious.

With these incredible easy vegan jambalaya recipes, you have no shortage of dinner inspiration. Your family will love the Southern dish with its French and Spanish influences.

Whether you want a protein-packed meal or a dish loaded with spices and veggies, there’s a perfect Jambalaya recipe for you.