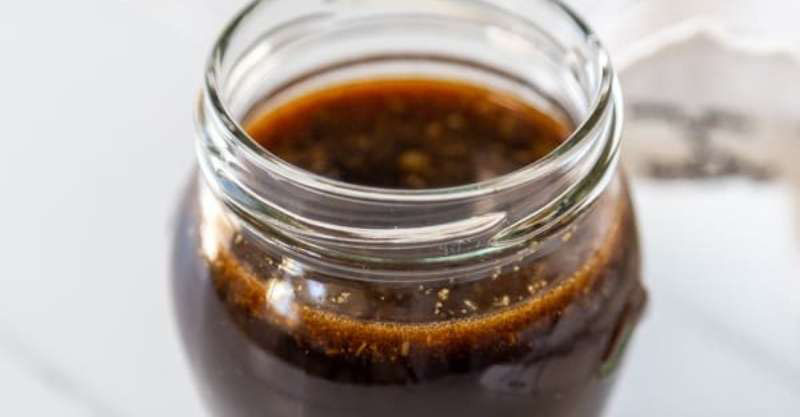 A vegan diet is healthy and delicious, but sometimes, ingredients of animal origin have a way of sneaking into some of the most common foods, like Worcestershire Sauce. But that doesn’t mean you have to say goodbye to this beloved staple. Here are our top recipes for making and enjoying your own easy vegan Worcestershire sauce.

There are some vegan Worcestershire sauces available in the supermarket. But what if you can’t find it where you live or don’t want to risk misreading a label? Are you worried about the flavor and consistency of the sauce ruining your dishes? No worries. This recipe is not only delicious, but it tastes like the original Worcestershire sauce, and it is faster and more convenient than going to the supermarket!

You can prepare this version of vegan Worcestershire sauce in only five minutes. It is easy to make, uses ingredients found in most kitchens, and keeps the traditional salty flavor of Worcestershire Sauce.

This recipe uses allspice, onion, garlic, pepper, and mustard to achieve the perfect flavor profile of traditional Worcestershire sauce. You can use this to add flavor to stews, soups, or even drinks, anything you would use the original Worcestershire for.

If this is your first time making this recipe and you are unsure what you can add it to, try this sauce with other vegan recipes like vegan Wellington and Roasted Cauliflower, and it is ideal for adding depth to dishes like lentils. Its flavor is deep and salty, and it will give all-around depth to any dish you choose to add it to.

One thing to keep in mind: this recipe uses soy sauce, which is not gluten-free. Soy sauce is made out of fermented soybeans and wheat. So if you want a gluten-free version of this recipe, make sure to substitute soy sauce for Tamari.

What is Tamari? Tamari is the byproduct of making Miso. It is merely soy-based and has no wheat in it. Think of it as “glutted-free soy sauce.” It has a slightly deeper flavor than soy sauce. If you are curious, you can find it in the Asian section of most supermarkets.

This vegan Worcestershire sauce will last one to two months in the fridge.

Worcestershire sauce is not only for meat dishes. In fact, it is a versatile and excellent option to add to any kitchen. It is used as an ingredient in many tasty dishes, and it adds a ton of flavor to any meal you add it to.

Traditional Worcestershire sauce uses anchovies or fish sauce, which is why it is not appropriate for a vegan diet. But you don’t have to deprive yourself of this delicious addition to your meals. This recipe is super easy to make and uses very few ingredients most people have at home. It takes only ten minutes to cook up a batch, and it will keep in your fridge for up to two months.

This recipe balances diverse and contrasting flavors for an interesting result. It has the saltiness of soy sauce (which is not gluten-free but can be easily substituted by Tamari if you have a gluten allergy) and the sweet deep sweetness of maple syrup (if you don’t have any handy, you can replace it with brown sugar), and the delicious tanginess of apple cider vinegar.

These flavors come together to create a delicious mix of flavors that will add depth to any dish you want. So, why not give it a try? You are sure to love it!

One of the challenges of changing your diet is finding satisfying substitutions for your favorite dishes. One of those foods is Worcestershire sauce. However, getting the flavor right is usually a challenge because Worcestershire sauce has a distinctive, deep fishy saltiness that is hard to imitate using only plant-based substitutions. Fortunately, this recipe has cracked the secret!

This recipe is delicious and packs a ton of flavor. It is another perfect option if you are a fan of traditional Worcestershire sauce. If you have tried other recipes and substitutions and still miss the salty, anchovy flavor of the original recipe, then you should try this one. It tastes the same as the original Worcestershire sauce, and you can also make it in ten minutes!

You can use this recipe to add that traditional salty, zesty flavor Worcestershire sauce brings to any recipe. One thing to keep in mind, though: it is not gluten-free, so if you are sensitive to gluten, you may need to make some modifications.

You can use this recipe to add vegan Worcestershire sauce to different meals and marinades, for example. You can use it in elaborate dishes, like veggie stews or shepherd’s pie. You may try it as a flavorful addition to simpler guilt-free comfort foods, like a delicious baked potato or a warm, gooey, vegan grilled cheese sandwich.

It also works well as a companion for a healthy side dish like spinach. Or you can use it to create an indulgent dip if you mix it with veggie mayo. It even works as an extra flavor push for a delicious Bloody Mary.

Martha Stewart’s recent ventures into plant-based options have yielded this wonderful vegan option for Worcestershire sauce. Worcestershire sauce was invented in the nineteenth century by two pharmacists, Lea and Perrins. The sauce became popular almost overnight thanks to its salty and bold flavors.

This particular recipe is extremely useful and very convenient if you are looking for something to add an extra punch of flavor to any recipe, vegan or not. However, keep in mind that it requires soy sauce, so it is not gluten-free.

However, you have several options you can substitute instead of the soy sauce: Tamari, coconut aminos, extra water, or vegetable stock with a little more salt. These are all delicious options that won’t hurt the result.

This recipe is easy to follow. It takes only eight ingredients and takes about twenty minutes to prepare. Keep in mind that this sauce needs to be refrigerated. Refrigeration will keep it fresh for up to three months, just make sure you keep it in an air-tight container.

Did you know some people substitute Worcestershire sauce for Marmite or Vegemite in recipes where Worcestershire is not used as a marinade? However, this recipe is the perfect alternative if you don’t have any Vegemite or Marmite handy or simply don’t want to experiment. It only takes ten minutes to make, and it has a long shelf life: three months, as long as you keep it in an air-tight container in the refrigerator.

This recipe offers a unique, deep flavor due to its use of molasses. You only need to make sure you get the right kind. The recipe calls for unsulfured molasses, and any other kid may alter the flavor, so make sure you get the right one. You can also substitute the soy sauce for Tamari or liquid aminos. These will make the recipe gluten-free without sacrificing the flavor.

This recipe is gluten-free and uses fresh garlic instead of garlic powder, which adds a special punch to the flavor palette of the recipe. It also calls for apple cider vinegar instead of white vinegar, as the original Worcestershire sauce used. The switch from white to apple cider vinegar will result in a mellower flavor.

This recipe also calls for brown sugar to give the result a sweet touch without being overwhelming. You still get all the delicious saltiness of Tamari. The recipe requires you to heat up the sauce and reduce it to half its original volume. This reduction process results in a thicker sauce (without the need for artificial thickeners!) and enhances the flavors.

This recipe is ideal for cocktails, such as Bloody Maries. You can also add it to marinades (it shines when used in Tofu marinades) and soups (especially lentils). You can also use it as a base for other sauces, such as BBQ sauce, as it adds a deep smoke sweetness.

To make sure your sauce lasts the longest time possible, you must store it in a mason jar and refrigerate it. This way, your Vegan Worcestershire sauce will last you up to three months.

At only six calories per serving and lower sodium, it is, without a doubt, a healthier alternative. This recipe uses cayenne pepper, too, so if you want to add an extra punch of spiciness to your food, this may be the recipe for you. Another interesting change in this recipe is substituting cloves for allspice, which gives the resulting sauce a deeper, woodier aroma and taste.

This recipe uses easy-to-find ingredients that you can find in almost any kitchen. The result is a sauce that is both versatile and delicious. You can even use a small portion of this sauce as a substitution for recipes that call for wine. It is also ideal for adding to chili recipes, Seitan recipes, or any dish that needs that extra punch of Umami flavor. This sauce is the perfect addition to recipes that call for a full-bodied broth, sauce, or marinade.

Traditional Worcestershire sauce uses white vinegar, fermented onion and garlic, molasses, spices, citrus, and anchovies. This recipe doesn’t use anchovies, of course. Instead, it calls for warm spices, molasses, orange juice, vinegar, and the brine from capers to give it an extra push of traditional flavor. As a result, this vegan version is very close to the original recipe in terms of flavor.

This recipe is easy to follow and takes only a few minutes to complete. But you will have to wait a little longer before you enjoy it. Once you are done preparing the recipe, you need to refrigerate it for a week before you use it. This is because the flavors in the sauce need to melt together.

The sauce from this recipe will last a month in the refrigerator.

10. Home Made Vegan Worcestershire Sauce by One Green Planet

This recipe results in a delicious, flavorful, tangy sauce ideal for “meaty” vegan dishes. You can use this recipe to enhance the flavor of vegan staples like stews, gravies, chili, veggie burgers, meatless loaves, anything made with Seitan, BBQ sauce, and even add it to some V-8 juice for an indulgent Bloody Mary.

This recipe is very easy to make. It is also budget-friendly and has a sugar-free option. This recipe yields about one cup and takes twenty-five minutes to complete. It uses all the traditional ingredients of Worcestershire sauce except for the anchovies. It also adds a bit of pepper for an extra kick and apple cider vinegar for a mellower flavor and to make up for the lack of sweetness of tamarind, which is not used in this recipe. It will keep in the fridge for about three months if stored properly in an air-tight container.

This recipe produces a sauce that is very close in flavor to the original version. This sauce has a powerful Umami flavor, although it has no fish, and it has the sour notes from the vinegar and just enough sweetness to make it deep and interesting.

Decided on dinner only to find that you need a good vegan Worcestershire sauce in the recipe? Need to whip it up quickly? This is the perfect recipe. With only eight ingredients, the whole thing is done in 20 minutes.

Wander Cooks is a blog that while isn’t vegan, has some vegan recipes. For this particular recipe, you just throw all the ingredients into a sauce pan and boil. They recommend you strain and cool before serving, but if you need to use this immediately for dinner, that’s okay too.

Worcestershire is a staple in many kitchens around the world. It adds a special depth to the flavors of the most popular dishes worldwide. And now, you can enjoy a healthy, vegan version of this beloved staple.